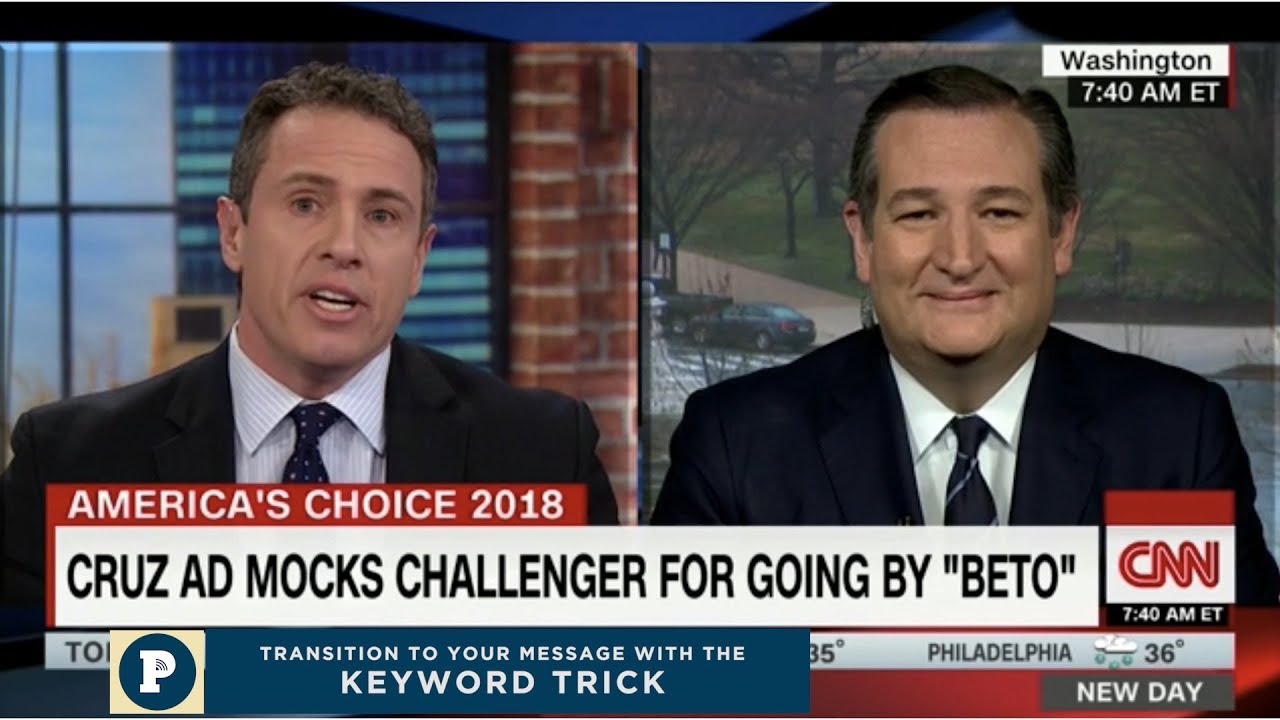 Texas Senator Ted Cruz recently faced some tough questions about a campaign commercial that mocks his opponent. In a high profile live cable news interview to respond, Cruz utilized a classic technique to transition away from negative questions. Russ Rhea with the Predictive Media Network explains the “keyword trick.”

One of my favorite techniques to gracefully transition from a bad or negative question where a direct answer is a “no win,” is what we call “the keyword trick”

When you hear the question coming out of the interviewer’s mouth and you know it traps you into being defensive or a real answer would dominate the story, listen for keywords that lead you back to your prepared messages.

It makes it sound less evasive and more like you’re answering.

Here’s a recent example where Texas Senator Ted Cruz was being asked about his campaign commercial that poked fun at his opponent’s nickname:

Chris Cuomo, CNN Anchor:
Your name is Rafael. You go by Ted, Your middle name is Edward. That’s an Anglicized version of it. He want the other way and has a more ethnic version of it. Why go after it? You’re both doing the same thing?

Senator Ted Cruz:
Listen, you’re absolutely right. My name is Rafael Cruz. I’m the son of my father, Rafael Cruz, an immigrant from Cuba who came to Texas was nothing. He had $100 in his underwear, couldn’t speak English and washed dishes making fifty cents an hour. My Dad’s journey as an immigrant coming to Texas seeking freedom, that’s the American story. That’s who we are. In terms of the jingle, some of it is just having a sense of humor.

Russ Rhea:
When anchor Chris Cuomo brought up his real name, Rafael, Senator Cruz seized the opportunity to tell the story of how he’s the son of an immigrant, rather than immediately being on the defensive to explain why he’s making fun of his opponent’s nickname.

He eventually addressed the campaign spot, but first delivered a positive message he wanted the audience to hear.

Keywords in the question can help you transition to your positive message.